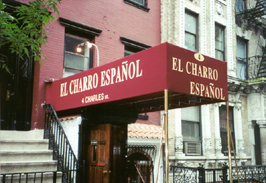 The primary meaning of the Spanish word “charro” is a Mexican horseman or cowboy.  So the name that appears on the awning of this restaurant in the West Village is something of a puzzle:  the Spanish Mexican Cowboy.  This confusion or mixture is rather appropriate:  for here is a Spanish eatery that is categorized by Manta business information as a “Mexican restaurant.”  And the establishment itself claims to serve up both “authentic Spanish cuisine and the best margaritas in town.”

Placing “Mexican” dishes and drinks –tequila, margaritas, enchiladas and nachos—on the menus of Spanish restaurants in New York is a fairly common practice, even though there is remarkably little overlap between these two Hispanic cuisines –particularly when we’re dealing with the very limited version of Mexican cuisine that is usually in play here.  Corn flour products, melted cheese, avocados, cilantro and spicy sauces are, in traditional Spanish cuisine, rare to non-existent.

There are at least two ways of interpreting the commingling of these two diverse culinary traditions on a single menu.  One interpretation sees the combination merely as a form of economic opportunism: if ignorant or unknowing New Yorkers or tourists don’t clearly distinguish between Spanish and Mexican food, why shouldn’t an enterprising restaurant owner be able to cash in on that misunderstanding?

The other interpretation views this kind of juxtaposition of cuisines as a product of history, an example of how, in the cosmopolitan space of New York, where Hispanic people from more than twenty countries live and eat together, new non-national Hispanic cultural forms can emerge, in combinations and syntheses that make the conventional nation-based notion of “authenticity” somewhat inoperative.

Julio Camba, a Spanish visitor to New York in the late 1920s, gives voice to this second interpretation, when he describes his dining experience in Spanish Harlem. Along the way chastises his readers back in Spain for their provincial notions of “authenticity”:

And the restaurants, for their part, wouldn’t be considered Spanish restaurants if on the menu, next to Valencian rice or Catalonian escudella, we can’t find tamales, churrasco, mole de guajolote, chile con carne, barbacoa, sibiche, el chupe de camarones and other Hispanoamerican platillos (dishes) or antojitos (appetizers).  And if you, reader, find this nomenclature somewhat barbarous, I can only lament that, because such a reaction would prove not that you’re very Spanish, but that you are hardly Spanish, that you have an exclusively peninsular concept of Spain and that you are lacking in awareness of our national history.

If, in fact, you are lacking this historical awareness, and you’d like to acquire it, you can do no better than to come to this neighborhood in New York that I’m talking about, where you’ll find a miniature version of a very grand Spain… 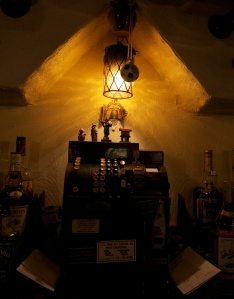 The Hispanic New York clientele of “Spanish” restaurants was remarkably diverse in the early twentieth-century –Spaniards, Cubans, Puerto Ricans, Dominicans, Mexicans, etc.  Spaniards working in the food service industry themselves had often arrived to New York only after stints in other parts of Spanish-speaking America, such as Argentina, Mexico, Cuba or Puerto Rico.  Such is the case, for example, of restaurant purveyors Prudencio Unanue (founder of Goya Foods), Joseph Victori (founder of Iberia Foods), Gregorio Bustelo (Bustelo Coffee) and Carmen Barañano de Moneo (Casa Moneo), and of the restaurateurs Valentín Aguirre (Jai Alai), Avelino Castaños (La Bilbaína) and Benito Collada (El Chico). El Chico’s menu boasted of being “as Spanish as Spain,” though this in no way prevented the inclusion of dishes such as Mexican chile con carne, Puerto Rican pasteles, or guava preserves with cream cheese.

So is the Mexican/Spanish hybridity of El Charro (Español) a result of entrepreneurial opportunism (“just give them what they want”), a product of history (just give them what we eat), or a combination of both (negotiate between what they want and what we eat)? This is, in many ways, the dilemma always faced by every “ethnic” restaurant in New York.

A review of the ads placed by El Charro in the Restaurant and Cabaret Guide of the New York Times suggests a complicated story in this regard.  From 1955 (the earliest ad) to 1960, the advertisement for “El Charro” (without the adjective “español”) announces “tamales, enchiladas, chicken mole, guacamole salad, paella, cocktails.”  Starting in 1960, the tagline in ads for El Charro is “elated we are related to El Parador on the East Side. Authentic Mexican Cuisine.”  El Parador, opened in 1959, was probably the first hugely successful Mexican restaurant of contemporary New York.  El Parador’s original owner and maitre d’, the Mexican-born Carlos Jacott, married the daughter of the chef-owner of El Charro; in a 1966 Craig Claiborne article, about the (justifiable) long-lines at El Parador, Jacott explains that “almost every morning he is in the kitchen of [El Charro on Charles Street] assisting in the preparation of various sources including the mole… creole sauce and enchilada sauce.”  Ads for El Charro in the late 1960s invite readers to “feast fabulously on the finest Mexican food.”  So it seems that between 1955 and 1970, El Charro was  primarily a Mexican restaurant which served some Spanish dishes (paella, for example).  Ads in 1971, 72, 76 and 77, nonetheless, boast, with a thoroughly ambivalent hyphen,  of “authentic Mexican-Spanish cuisine.”

Things get even more complicated in the mid-1980s.  A 1984 ad makes reference to “our two restaurants, serv[ving] the finest in Spanish and Mexican Food since 1935.”  It seems that the second restaurant, located on East 34th Street, was known as “El Charro Español” while the one on Charles Street continued to be called “El Charro,” even though the menus at both seem to have been similar, if not identical.  Throughout the second half of the 1980s, tandem ads for both Charros in the New York Times featured a quotation –without the hyphen– from a Rex Reed review in the New York Post:  “the greatest Mexican and Spanish restaurant in New York.”

It isn’t until  1990 that we first come across an ad with a reference to the restaurant at 4 Charles Street as “El Charro Español,” and a tag line that promises “classic cuisine of Spain, with the mystery of Mexican delights.”  In 1993, the ad refers only to “Classic cuisine of Spain”; and in 1995, the year before the last New York Times ad, the text says “The best paella in New York, Zagat.”

Many New Yorkers believe that some Spanish restaurants simply added some Mexican items to their menus in the 1980s, when Mexican food became somewhat popular.  But the history of the “Spanish Mexican Cowboy” and of other Hispanic eateries in the city suggests that the story is much older and more interesting.