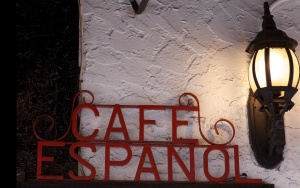 Café Español is one of those little treasures in the West Village; it’s located at 172 Bleecker and has been there ever since it first opened its doors in 1976. This restaurant originally began as a small Spanish/Mexican eatery (with around 60 seats) and was owned by two Galicians, Andres Seves (who ran the kitchen) and Sebastian Fernandez (who administered the dining room). Although for many years Café Español was owned by the same proprietors, in 2003 Andres sold his share of the restaurant to Rosendo Fernandez. Rosendo had been originally a bus boy in the 1980s while he was still in high school, eventually became a waiter and when the offer came to become an owner of Café Español, he took it. 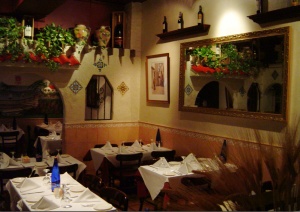 Nowadays the restaurant has a capacity of 200 people, and is very well known for its paella, lobster, tapas and sangria. The entrance to Café Español is heartwarming:  a rustic wood bar and at the back of the room a vibrant mural reminiscent of Spanish landscape; beyond the main room there is also an interior garden with a fountain that is usually rented for special occasions. Moreover they also have a sister restaurant that goes by the same name on Carmine St.  The remarkable diversity of clients at the Café Español is a testament to its success: from the president of Columbia University, to tourists from all over the US, to NYU hipsters.