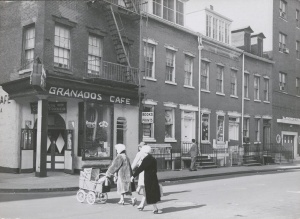 “Lorenzo de Granados, father of the Spanish Cusine [sic] in New York is happy to share his culinary scientific knowledge with you, acquired through 500 years of Tradition.”

These words appear in the header of an undated menu, found on e-bay, from the Spanish restaurant “Granados”, that from at least 1951 to 1971 was on the corner of MacDougal and West 3rd St.

A New York Times article from January 2, 1951 about “empanada” (Spanish meatpie) is 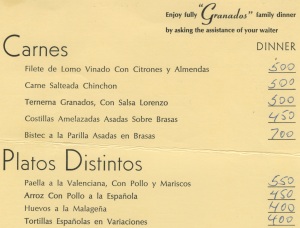 based on the reporter’s visit to Granados:  “Larry Lorenzo, the propietor who presides over the establishment with the friendliness and geniality of a true Spaniard, prepared the dish (empanada) for a few friends.  Later, he and his partner, Julio, served the same pie to their waiters who, they feared, might become homesick for their native Spain during the holidays.”

Another New York Times article states that, in 1959, a waiter and chef from Granados, José Pérez, partnered with Andrés Lugris, and took over El Faro restaurant, on Horatio Street in the far west village, which had first opened its doors in 1927.

Finally, an advertisement for Granados in New York Magazine from November 15, 1971 promises:  “The finest in authentic Spanish food prepared with imported Spanish products. Intimate dining with guitarist after 10pm.”

If you have additional information about Granados, please leave a comment below.

To view a scanned menu from Granados, click here.

To link to an article about the history of the building at 125 Macdougal, click here.

For a link to more images of Granados, click here.