Our Lady of Guadalupe Church (far right with protruding facade) and adjacent buildings on the north side of West 14th Street (looking west). Photo from digital archive of the New York Public Library, c. 1929.

Spain and Spaniards have occupied a prominent position in the history of Catholicism in New York City.  For example, in the early-1780s, Spain’s first “ambassador” to the new United States, Diego de Gardoqui, lobbied for the establishment of Gotham’s first Catholic Church.  King Carlos III of Spain himself made a substantial contribution of 1,000 pesos fuertes and in 1786 St. Peter’s Roman Catholic Church went up at 22 Barclay Street in Lower Manhattan. (See Mike Wallace’s essay in Nueva York:  1613 – 1945) (Three years later, and just a few blocks away from St. Peter’s, Gardoqui –who had helped funnel Spanish aid to the leaders of the American Revolution– would stand beside George Washington  at the inauguration of the first president of the United States.)

The Spanish inventor and entrepreneur, José Francisco Navarro, who had been living in New York since 1856 was a principal contributor to the fundraising campaign aimed at the construction of St. Patrick’s Cathedral.  When, in late May of 1879, the recently completed Cathedral “auctioned” off its pews as a fundraising initiative, Navarro made off with the main pew (first row, to the left of the main altar) with a  staggering bid of $2,100, plus a $150/year maintenance fee in perpetuity!

And in 1912, thanks to the good offices of Spain’s Consul General in New York and his wife, Our Lady of Hope Church was built on property donated by Archer M Huntingon, adjacent to his recently inaugurated “Spanish Museum,” the Hispanic Society of America on Audobon Terrace.  This church would be frequented by Spaniards and Hispanics living uptown.

But the first New York Catholic Church built expressly to serve the city’s growing Spanish population, Nuestra Señora de Guadalupe, was constructed in 1902, on the north side of West 14th Street between 7th and 8th Avenues, in the heart of what would become known as “Little Spain.”  Architects took two residential brownstones (229 and 231) that had been built in the 1840s (and that had belonged to the restaurateur, Delmonico), and transformed them into a lovely church, which for more than 100 years would be downtown Spaniards’ preferred place of worship and devotion, where dozens of baptisms, communions, confirmations and weddings took place.  The Spanish-style façade, designed by Gustave Steinback, was added in 1921.

The number of Spaniards in the West 14th Street area declined precipitously throughout the second half of the twentieth century.  But in 2003, the fast-growing Mexican population in the area led to a dramatic increase in parishioners and the need for a larger church.  It was then that Our Lady of Guadalupe moved just a block west to the Roman Catholic Church of St. Bernard –on the south side of West 14th Street between 8th and 9th Avenues.  St. Bernard had been built in 1875, and in the early 2000s was on the verge of shutting down due to a lack of parishioners.  Now, Our Lady of Guadalupe at St. Barnards is a thriving and vibrant Catholic church.  The original building of Our Lady of Guadalupe is currently unoccupied (2011). 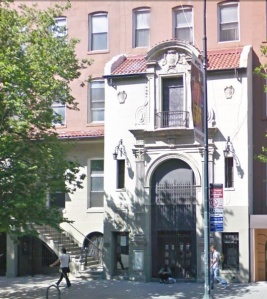 Though Little Spain is long gone and the area today is home to people of many different ethnicities, Our Lady of Guadalupe at St. Bernard’s is still very involved in the Hispanic communities of the city, offering English classes for immigrants or children of immigrants who want to improve their language skills, for example. And word has it that some of the best tacos and churros in the city are to be bought from the trucks and carts that park outside the church on Sunday mornings, to greet and treat the parishioners as they come out of Mass.